Dorper and White Dorper sales on AuctionsPlus have registered considerable growth over recent years, with strong numbers being offered and rising prices since 2016. 2020 and 2021 have resulted in strong price returns for Dorper stock categories, underpinned by the desire to rebuild stock numbers.

The variance year-on-year can be attributed to seasonally influenced conditions. Looking to 2017 and 2020, when over 130,000 head of pure Dorper listings were offered on the platform – the result of a strong restocking market, with demand and prices strong. 2021 is shaping up to be the biggest listing year yet, with numbers for the first half of the year already totaling 87,376 head. 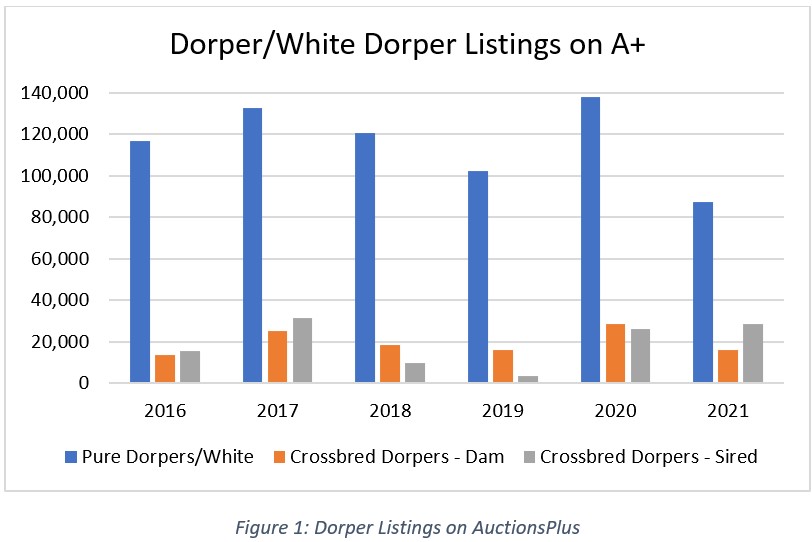 The biggest driver of the growth in 2020 and 2021 has been the surge in demand for shedding breeds, as many operations look to rebuild from the ground up following an extended drought period. The rebuild demand has corresponded with some significant price returns for not only shedding breeds, but all livestock.

Dorper ewe prices have seen a dramatic rise from 2019 to 2020 for both purebred and first cross categories, increasing 85% ($242/head) and 100% ($271/head), respectively. For the year to date, prices for purebred Dorper’s have remained firm and first cross ewes have seen a reduction of 39% to average $166/head.

Scanned in Lamb (SIL) Dorper ewe articles in 2020 also witnessed strong price gains, as the demand to restock saw prices for all sheep stock categories climb, especially for SIL articles as the two-for-one unit helped producers get more stock on the ground quicker. SIL purebred Dorper and White Dorper ewes witnessed an 81% increase in average prices from 2019, averaging $326/head. These highs have been sustained into 2021 with the price remaining firm.

Offerings as shown in figure 1, have remained consistent year on year, with seasonal conditions being the main influence on numbers. 2020 for example was the largest throughput experienced online for Dorper sheep with a total of 137,971 pure Dorper’s listed, not far ahead of 2017 where 132,714 head were offered. Drought conditions resulted in a considerable reduction in 2019 where numbers totaled just over 100,000 head. Looking to the state breakdown, NSW dominates in both listings and purchases, with 56% and 53% of total numbers, respectively. Most states are weighted evenly between listings and purchases, except for Victoria. Victoria has purchased a much greater percentage than they have listed, purchasing 18% of the total offering, while only listing 6%. 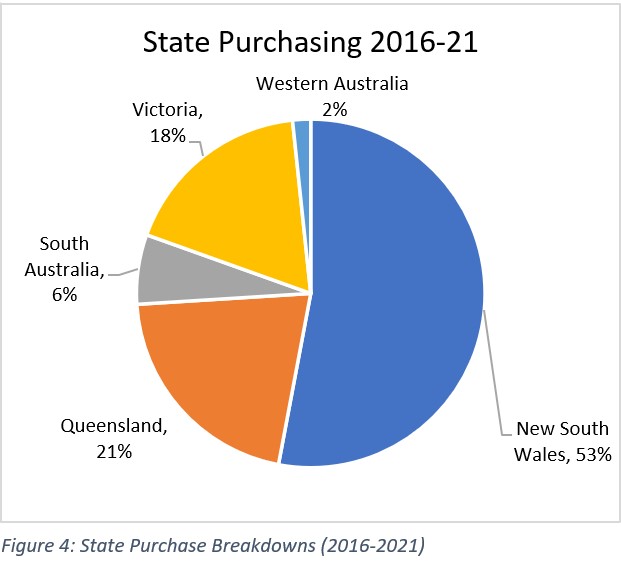 Demand for Dorper’s is expected to remain high as restocking demand continues across the Eastern States. The highs witnessed in 2020 may not be feasible for the remainder of 2021, but above average prices are expected, with the breed remaining highly sought after, with weekly AuctionsPlus clearance rates remaining at strong levels.