Our first connection with the breed came in 1996 when SAABCo held an online Auction of Dorper embryos that had been in Quarantine storage for a number of years and finally had been released.  I bid on them but missed out because they were too expensive for me.

By the end of 1996 the Australian protocols for import from South Africa were established by a group of Angora breeders and the search was on. 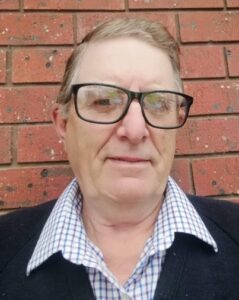 I accompanied this group to South Africa in November as a consultant to two of the partners to select Angora donor studs. After the stud visits I was left to visit the Vet and check out the quarantine collection centre.  While accompanying the Vet to an AI program near Loxton he threw me the keys of his ute and gave me directions to meet with a local Dorper breeder.  The White Dorper photos on the original breed colour brochure used by our Association were taken that day at Kasteel Dries Wiese’s White Dorper stud.

By the end of 1997 we had White Dorper lambs on the ground with a Saltbush stud no 21, a partnership that saw the establishment of a number of studs in South Australia even before the partnership share of sheep had been distributed.  Axis, Edson (and Redrock), Parilla (that was absorbed by two partners that kept the name Saltbush).  The other consistent asset of these partners was that they were all breeders with extensive commercial experience in goats, sheep or cattle – or all three.

In the beginning the sheep were a bit precious and the commercial sector (including me) were besotted by the live export market.  It was printing money to get $65-$75 for a Damara cross lamb barely 35kg live.  We all know how that ended up with a bit of shonky business in the Middle East shutting down the trade. Suddenly Dorper rams went out everywhere and the live sheep breeders were in the prime lamb trade.  One of my clients started buying Dorper rams a couple of years before the trade fell over because he wanted security in case it failed and he was able to adjust quicker than most.

In one of the projects I managed we had about 70 embryo rams of White Dorper and Van Rooy I was trying to get the agistment partner to grow out to market with a bit of weight behind them.  When I went to visit to check the rams – they had all “escaped” into Merino ewes and lost all that body condition setting us back a couple of months with marketing.  The resulting 1200 lambs were actually very handy to put Dorpers over later on when I became a partner in that commercial operation as well – the performance of Dorper lambs out of Merino ewes in marginal areas beat anything else I had seen.  Instantly in the prime lamb game.  Further development and selection for shedding also gave us a barrier to grass seed penetration which was a historic issue and involved a $1 per kilo penalty.

Charlie Edson let our two Saltbush White Dorper sires into 500 ewes early in the piece and was probably the first breeder to get F1 ewe lambs to establish their commercial flock.
340 or so lambs gave us some idea of the serving capacity.

The Parilla Stud set a pen of 10 White dorper rams in 1999 at commercial sector prices and Steve Cresswell came in and bought the lot – one of our early discerning buyers that went on to have good numbers of stud and commercial sheep.

Over the first 10 years or so of the Dorper breed, the initial breed society was established with principally commercial breeders that may also have had stud experience with other breeds/species. It was a time of cooperation and most board members became friends.

The aim was to keep it simple - the first constitution was slashed down to a bare minimum much like the one at the time for the White Suffolk society, the majority of the board kept resisting things like typing and any form of elitism - any regulations resolved to keep everyone included and the focus on the commercial perspective.

This trend changed later with more political intent in the background and became quite a contentious meeting place – I believe this opened the way for an alternative society to restore the original focus.

Some of the great things that feed back to the breeder:

One of the things overlooked when doing the financial comparisons between Merino wool and a Dorper meat operation in the drought areas is the ability to keep a breeding nucleus through most droughts.  It was important in our Parilla commercial operation where several times we sold down due to drought and bred back in again after freeing us from the “sell cheap, buy dear” of the Merino era of the same property.  While we sold at lower prices when times were tough, we never sold Dorper commercial sheep cheap.  Demand at the time allowed them to be sought from quite some distance away.  This last run of drought may be different but even the meat prices were profitable of recent years.

I have been in a number of breeds in the commercial sector – some faded out after the high promotions of the early years because they were not truly commercial outside of green grass and grain feeder territory.

From the moment the Dorper went out into commercial ewes it did not need big promotions, did not need a breed society to remind people of its positive traits – It actually did the hard yards and changed the pastoral region into another prime lamb sector. It sold itself.

Certainly it took some time as farmers were hammered with so many “wonderful” options but as soon as those first lambs hit the deck they were convinced.
Many of those are still in business only because they made that change.