The goal of every sheep breeder is to turn off progeny that are more profitable and productive than the previous generation.

Using traditional genetic selection methods, such as visual assessment of conformation and type, transforming a flock from ‘average’ to ‘elite’ could take decades.

These traditional methods of selection remain as important as ever, but new objective genetic evaluation tools like DNA testing, allow breeders to press ‘fast forward’ on the pace of transformation by enabling them to identify with greater certainty and at a younger age the stock they need to keep and those they should cull.

Neogen Australasia’s Territory Manager for South Australia and Western Australia, Dan Roe, said genomic technology may have once been daunting for breeders and complicated to adopt, but for those new to genomics the current range of sheep DNA tests were simple to use and the results easy to interpret.

“DNA testing is a fast, accurate and cost-effective method for sheep breeders to accelerate the rate of genetic gain in their flock,” Mr Roe said.

“Visual assessment for conformation remains very important; DNA testing is simply another tool in the box to allow you access to the information you can’t see.”

“DNA testing helps breeders to identify exactly which rams and ewes to join by providing information on which animals contain the genes needed to achieve a specific breeding objective.

“It gives early access to information on hard-to-measure traits, like intramuscular fat and tenderness, which they would otherwise have to wait until slaughter to obtain.”

Genomic selection works by DNA testing an animal and comparing its DNA profile with thousands of other animals that have been DNA tested and measured for important traits. Based on this DNA comparison the genomic breeding value of an animal can be predicted.

Many ram breeders and ram buyers already use Australian Sheep Breeding Values (ASBVs) to select animals using objective genetic records; these are further enhanced by the inclusion of genomic data from DNA tests.

Having visually identified the pick of a drop, the next step was to DNA test to identify which animals to use in a breeding program, Mr Roe said.

Testing can happen very early in life to enable the use of ram lambs in a stud breeding program and further shorten the timeframe for new genetics to have an impact on the overall flock performance.

Mr Roe recommended defining a clear breeding objective before embarking on a DNA testing program to ensure that test results were used to maximum effect in pursuing a genetic profile that aligned with the business’s profit drivers.

Mr Roe said two types of test were available to sheep breeders – the Parentage Test and the Sheep Genomic Test.

The Parentage test can link a lamb to its dam and/or sire and is ideal for use in multi-sire mating programs.

Combining the results from these tests with tools like the web-based app RamSelect, producers can then compare how animals compare to industry averages for these traits, and then select replacement rams to bolster any genetic weaknesses.

Mr Roe said Neogen staff were available to support the implementation of DNA testing in a breeding business, but recommended breeders also work with their farm adviser or Sheep Genetics prior on questions such as which animals to test, how to interpret the results, and how to incorporate genomic information into your breeding program to achieve your breeding objectives sooner.

Adoption of genomic technologies is also being supported by Meat & Livestock Australia’s Accelerated Adoption Initiative, which is providing free membership to Sheep Genetics to encourage more studs to take part in objective genetic selection technologies like ASBVs and genomics.

Getting started is easy with Tissue Sampling Units

The genomic testing process starts with collecting a DNA sample from your animals and Tissue Sampling Units (TSUs) are quickest, easiest and cheapest option available for livestock breeders.

Neogen can also analyse DNA samples provided on blood cards, but TSUs are Neogen’s recommended method for submitting DNA samples as they result in consistent sample type and quality. 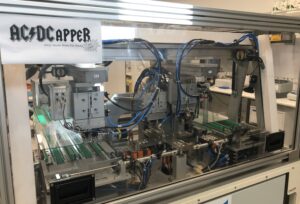 When connected with Neogen’s automated sample processing equipment, the benefit to breeders is reduced turnaround times and fewer sample rejections and fails. On farm there’s also less chance of a mix up when collecting samples as the TSU places each sample into a bar-coded vial, which can be scanned into a producer’s data management system.

“TSUs enable Neogen to deliver test results back to producers more quickly,” Neogen Territory Manager for SA and WA Dan Roe said. “This is because the tissue samples are stored cleanly in the sealed vials, resulting in fewer re-runs, and they can be processed automatically using our laboratory’s robotic processing equipment.

TSU Applicators and TSU Collection Kits are available via the SheepDNA website and include: 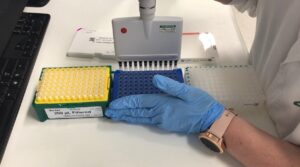 Users must ensure that their RFID equipment is correctly configured for collecting TSU sample codes.

Although not compulsory for blood cards or TSU samples of less than 50, breeders are encouraged to supply an Animal Sample Data file with all returned DNA samples if possible, which assists Neogen in streamlining data samples and reducing turnaround times.